Swapping one major league for another in January is never easy, but there are those who have adjusted to new surroundings without any real teething issues. Luis Diaz looks a seasoned pro in a Liverpool shirt rather than one who left Porto for Merseyside at the start of the year. The Colombian has slotted in seamlessly for Jurgen Klopp's side after his big money arrival from the Liga Bwin outfit, giving the German additional attacking flexbility where required.

Sadio Mane has been used as the lead striker when Klopp has opted against using Diogo Jota or Roberto Firmino to spearhead the charge, with Diaz operating from the left, quashing fears the latter was signed to replace the former. He is not the only big name player to swap Portugal for England in the winter and succeed either, following in the footsteps of Bruno Fernandes, who left Sporting CP for Manchester United in January 2020.

Premier League teams may have witnessed the attacking impact of Fernandes and now Diaz as a way of dipping into the Portuguese market as they seek new ways to strengthen. Fernandes may have struggled for a sub-par United side this term, but even so, only Kevin De Bruyne (207) has created more goalscoring chances than the Portugal international (205) since the start of 2020.

Diaz, meanwhile, is the Premier League's best rated January signing having earned a WhoScored rating of 7.32 in a Liverpool shirt. He may have scored only twice in England's top tier, yet the 25-year-old has clearly adjusted to the rigours of Premier League football with ease. Unfazed by Klopp's demands, rather Diaz compliments the 'heavy metal' football the German implements, adding that touch of unpredictability to a hard-working mantra that means Liverpool have won possession in the attacking third more times (231) than any other Premier League team this season.

With Diaz joining Fernandes and Ruben Dias in the top five of the most expensive Liga Bwin player sales in history, Portuguese sides are aware that, with the right scouting and coaching, they can turn a huge profit on unearthed gems that just need polishing. And the ease with which Diaz has transitioned from Portugal to England will convince potential suitors that Darwin Nunez is certainly worth a gamble.

Nunez, like Diaz, endured a so-so 2020/21 season only to set Liga Bwin alight this season. Diaz departed in January with 14 goals and four assists to his name, while Nunez (24) moved nine goals clear in the race to land the Liga Bwin Golden Boot with a hat-trick against Belenenses SAD on Saturday evening.

Both players scored in the first leg in Lisbon with Diaz landing the WhoScored man of the match award at the Estadio da Luz. His rapid settling in may well convince Nunez that he, too, can make an immediate impact in England were he to secure a big money summer move to the Premier League. There are no shortage of interested parties in the Uruguyan in England, with a host of Champions League chasing sides monitoring the 22-year-old.

He certainly has the qualities to make a name for himself in the Premier League, with a willingness to pull to the left suggesting he could prove the perfect foil for a frontman that prefers to remain in more advanced central areas to get the end of chances. The Uruguay international's knack for drifting wide would also suit a side that has wingers that look to cut infield when the opportunitiy presents itself.

When considering three of the Premier League's top four goalscorers - Mohamed Salah (20), Son Heung-Min (17) and Sadio Mane (13) - are wingers by trade, and three of the Premier League's top 10 assisters - Harry Kane (8), Alexandre Lacazette and Michail Antonio (both 7) - are centre forwards, Nunez's style and approach means he'd suit a tactic that sees the central strikers operate in a supporting role as well as tasked as scoring the goals.

While he may be a different player, stylistically, to Diaz, Nunez will have watched on as the former Porto man transitioned from the Portuguese powerhouse to Liverpool and the youngster may use that as motivation to convince suitors that he'd be able to make the switch between leagues as easily as the Colombian has done.

There will be a plenty of eyes on Nunez at Anfield on Wednesday night as he seeks to, again, get the better of the likes of Virgil van Dijk and Alisson, as his reputation, just as Diaz's did in the opening months of 2021/22, soars. 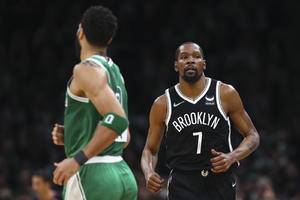 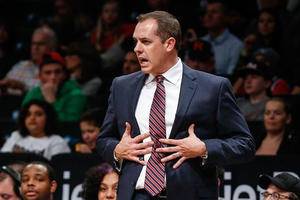 The Los Angeles Lakers fired head coach Frank Vogel on Monday after they failed to qualify for the playoffs. Having finished the regular season with a 33-49 win/loss record in 11th spot, the Lakers were eliminated from play-in tournament contention after their loss to the Phoenix Suns on Tuesday.