A miserable Premier League season is finally ending for Manchester United. Still able to wrap up a Europa League spot on the final day of the campaign, they'll be eager to avoid finishing in the Europa Conference League position, but on the whole; it's been one to forget for the Premier League powerhouse

Following a summer splurge that saw them spend big on the likes of Raphael Varane, Jadon Sancho and Cristiano Ronaldo, fans had hoped they'd close the gap with Manchester City and Liverpool at the top of the table. Yet the reality is they sit closer to the relegation zone (24 points) than they do league leaders City (32 points) with one game to play.

There does, though, remain optimism about what is to come at Old Trafford. United have already confirmed that Erik ten Hag will take charge for the 2022/23 campaign, and the hope now is that he oversees a complete overhaul of a squad that is in desperate need of a rebuild. It won't be quick, and it won't be pretty, but supporters, and more importantly the club, need to be patient and allow Ten Hag the opportunity to carry out a necessary job.

One of those will be to sort out a defence that has conceded 56 league goals this season, six more than 18th-placed Burnley and just three fewer than Everton in 16th. Only Arsenal and Wolves (20) have committed more errors leading to an opposition shot than United (19) in England's top tier this term, and it's largely down to the exploits of David De Gea, who has made the second most saves (124) in the Premier League, that only three of those mistakes have resulted in a goal.

Yet for a team of United's stature, they shouldn't be relying heavily on a goalkeeper to bail them out so regularly. De Gea needs greater protection from his defence and the midfield and while a new centre-back isn't going to immediately correct their ongoing issues, the arrival of a defender of Jurrien Timber's quality would certainly be a step in the right direction.

The young Dutchman has been heavily linked with a move to Old Trafford, while Bayern Munich are also believed to be keeping tabs on Timber. However, with Ten Hag on board, it's the Premier League side who are ahead of their German counterparts in the race to land the 20-year-old.

Despite his tender years, Timber is a hugely composed individual and this mental quality played a key role in Ajax's title success this season. Ten Hag's side shipped at least 15 fewer goals (19) than any other team in the 2021/22 Eredivisie campaign with Timber starting all but five league matches. Eight of the 19 goals they did concede came in the five games the Netherlands international didn't start, which further signifies his influence at the back in Ajax's title winning campaign.

What stands out most is his distribution from defence. Ten Hag demands his side dominate opponents, which they did superbly in 2021/22, ranking first for both possession (66.6%) and pass success rate (84.7%) in the Eredivisie. In this instance, Timber was key, maximising a statistically calculated WhoScored strength of 'passing'. He finished third for passes per 90 (79.9) and returned the best pass success rate (91.5%) in the Dutch top tier, and this allowed Ajax to dictate the tempo on their way to landing silverware.

The issue would be whether he could transfer that quality to his game to the Premier League, where United see much less of the ball. Indeed, a 51.9% possession return is the seventh highest in the Premier League this season, though with Ten Hag at the helm and Timber in defence, fans would hope to see that figure rise as United establish an identity with the Dutchman in charge.

It might also be that United don't have the tools to implement such a dominant style of play, something that would change under Ten Hag and with a ball playing defender of Timber's ilk at the back. Even for a centre-back who stands at just 5'10", Timber is one who relishes the physical battle where needed, ranking among the top 10 players for tackles and interceptions combined (123) in the Eredivisie this season.

Of course, playing in the Eredivisie, it perhaps won't be as rough and ready as the Premier League, but it's proof that Timber can hold his own when required. Then there is the additional bonus that Timber is a versatile defender who is able to play at right-back. Given United's issues in the role itself, playing him here rather than throwing him in at the deep end could be a decent way to get the Dutch defender up to speed with the rigours of Premier League football rather than rely on him to immediately transfer his qualities to this, at times, error-strewn United defence.

This remains another aspect of Timber's that, too, requires work on. Ajax only committed eight errors leading to an opposition shot in the Eredivisie this season, but three of those were due to Timber. Fortunately for both player and club, only one of these was scored, but it does highlight an area of his game that needs ironing out.

A crucial aspect for United, though, is trusting Ten Hag with the process and if he believes Timber is a key man for the rebuild, then they'd be wise to back the incoming head coach as he seeks to make a positive start to life at Old Trafford. Timber isn't the finished article by any means, yet he's enjoyed a superb campaign that saw him earn a WhoScored rating of 7.40, enough to make the Eredivisie team of the season, and if Ten Hag is to implement the same dominating style of play that fans witnessed with Ajax, then a centre-back of Timber's ilk would go some way to aiding the 52-year-old get his ideas across in Manchester. 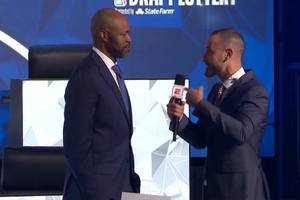 Magic coach Jamahl Mosley represents team as they win lottery for the first time since taking Dwight Howard No. 1 overall in 2004. Orlando Magic president of basketball operations Jeff Weltman was supposed to be at the podium for the NBA draft lottery. He benched himself in favor of coach Jamahl M 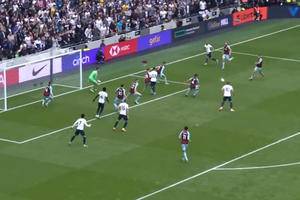 Gary Neville and Jamie Carragher both believe Leeds United will be relegated ahead of Burnley as the Premier League campaign reaches its clinax. Things remain tight at the bottom of the Premier League table to see which side will join Watford and Norwich City in the Championship next season. The Cl