Sassuolo have confirmed West Ham have made a £33.8million offer for Italy striker Gianluca Scamacca.

'There are also some add-ons as difference. There's no agreement with any club now.

'Nothing is certain. Yes, there are also some bonuses that are different, but there are issues that are not strictly financial, they are tied to the technical project and what the player wants.

'What we can say for certain is that we are not a club who are forced to sell, so we need to listen to the needs of the player, to the offers that come in and that could come in from one day to the next.'

Scamacca - who was also scouted by Arsenal earlier on in the window - scored 16 times in 36 Serie A appearances last season.

The Serie A outfit club want close to £43m for the 23-year-old, who has yet to score for Italy having represented them on seven occasions.

He had seemed to be on the verge of a move to PSG, but Sassuolo ended up rejecting an offer from the Ligue 1 champions.

Sportsmail reported Newcastle's interest in the forward last month, but the Magpies felt at the time he would prefer to stay in Serie A.

The Hammers meanwhile are still chasing Chelsea striker Armando Broja despite their bid for Scamacca.

Broja is interested in joining West Ham but also has interest from Everton and Newcastle, who are weighing up a number of options. 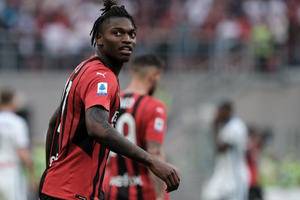