It's been a whirlwind 12 months for Enzo Fernandez. This time last year, he hadn't even earned his first senior cap for Argentina, and had only been a first team regular for heavyweights River Plate for a few months. As Julian Alvarez hogged the limelight, Fernandez casually went about his business in the midfield for the Argentine side.

Given the consistency to his performances, it was only a matter of time before he secured a move to Europe, with Benfica the winners in the race to land the 21-year-old. Paying a rumoured €15m to land Fernandez, that is looking all the more the bargain as the midfielder continues to shine.

Fernandez has earned a WhoScored rating of 7.22 in Liga Bwin this season, that ranking 12th in Portugal's top tier as he thrives both on and off the ball at club level. However, as good as he has been in his debut months for Benfica, few could have predicted that Fernandez would establish himself as the key man in the middle for this World Cup chasing Argentina side.

In the opening group stage games, Lionel Scaloni opted for a 4-4-2 setup, with Rodrigo De Paul starting alongside Leandro Paredes in the 2-1 defeat to Saudi Arabia, and then with Guido Rodriguez in the 2-0 win over Mexico. Fernandez came off the bench in both games, scoring the decisive second in the latter, and it wasn't until the Group C finale against Poland that Scaloni decided to change shape and utilise the Benfica man from the outset rather than off the bench.

The decision to do so has been a masterstroke. There are other mitigating factors as to the improvement in form, yet in using a 4-3-3, Scaloni has bulked out the midfield, with Alexis Mac Allister and De Paul flanking Fernandez, all the while using Messi through the middle with Alvarez from either the right or left, and this has resulted in a more functional, fluid Argentina side.

Messi is undoubtedly the star of the Argentine show in Qatar, but whereas in previous years, the PSG sensation would be Argentina's everything, in 2022, he has players around him capable of sharing the workload in the final third. Of course, Messi is Messi, and he is far and away Argentina's best rated player at the World Cup having earned a WhoScored rating of 7.94, yet without Fernandez anchoring the midfield, it's feasible to suggest that Scaloni's side would be caught out time and time again.

Of those to register 100 or more World Cup minutes for Argentina in Qatar, Fernandez is making more tackles per 90 (2.7) than any other player in Scaloni's squad. Only Nicolas Otamendi and De Paul (both 1.5) are making more interceptions per 90 than the former River sensation (1.2). He gets himself about the pitch with ease and this helps protect the defence, but crucially; allows Messi to wreack havoc in the final third.

On the ball, Messi is the most talented player of this generation, or to ever grace the game, yet when he out of possession, so often we'll see the 35-year-old strolling across the pitch, biding his time to hurt opponents. At his age, he needs that explosion of speed we have so often seen to maximise his attacking output, which was on show for Argentina's opening goal in their 2-1 last-16 win over Australia.

Pivotal to maximising Messi springing into action, though, is ensuring the support cast are able to mop up behind him and allow him free reign in attack, which only heightens Fernandez's importance in Scaloni's side. Along with De Paul and Mac Allister, there is a midfield trio that essentially provides a safety net for the front three in the 4-3-3 setup, all the while allowing full-backs Nahuel Molina and Marcos Acuna the freedom to get forward from deep and exploit the space left by the wingers when they do cut inside.

What supporters won't see, though, is Fernandez utilise the creative side to his game as has been exhibited regularly with Benfica. Indeed, key passes per 90 has dropped from 2.2 in Liga Bwin to 0.8 at the World Cup, with a greater onus on his midfield teammates and the full-backs to create these chances.

That being said, as is the case with any ball winner, they need to be adept at effectively recycling possession, and thus allow the more creative performers to forge the chances. As such, Fernandez carries out this duty to a high standard. A return of 99.3 passes per 90 is more than any other Argentina player, and is in fact the fourth most of those to have made three or more appearances at the World Cup. While a pass success rate of 89.5% suggests there is room for improvement in this department, for the most part, Fernandez knows how best to dictate the tempo once he does win the ball, a commendable feat for a player his age.

Of course, Messi is the poster boy for this Argentina side and understandably so. In his swansong international tournament, he is living up to the billing as La Albeceleste's main man, but unlike in previous years, this time Messi has the ideal core of players around him to fully utilise his talent. Fernandez, despite his inexperience at this level, might just be their most important in their pursuit of Messi's first, and Argentina's third, World Cup. 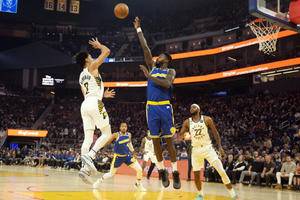 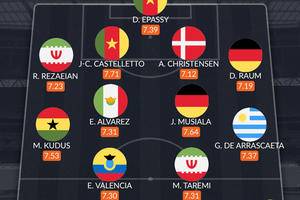 International tournaments are ruthless, and the World Cup is certainly no exception. With only 16 of 32 teams progressing to the knockout stages, there are going to be some high-profile casualties from the group stages. Here, of those to have made at least two appearances, we take a look at the best

Around the NBA, players and coaches have historically embraced stealing, or to characterize it a bit more respectfully, copycatting. Many years ago, when gravity-bound players discovered that shots could actually be made by leaping simultaneously, the jump shot replaced the set shot. After Bill Sha