Heading into the FA Cup third round weekend, Arsenal sit five points clear at the top of the Premier League table.

However, for the Gunners, every point counts in this title race, and so despite a draw being a decent result against a Newcastle side that have lost once all season, Mikel Arteta would have been disappointed not to take all three points, especially with a tough run of fixtures ahead and serial winners Manchester City on their tail.

Gabriel Jesus’ injury hasn’t help matters, not only for his goal contributions, but his overall impact on the team. Though it has to be said the trio of Gabriel Martinelli, Eddie Nketiah and Bukayo Saka have done well in his absence, scoring a combined total of six goals in three games since the return to action after the World Cup, accounting for all but one of Arsenal’s goals in those three games.

However, the main problem for Arsenal in this regard is options. On Tuesday against Newcastle when the frontline struggled to break down Eddie Howe’s stubborn backline, they didn’t really have anyone to bring on to make an impact, emphasised by Arteta not bringing any of his attack minded players on. The Gunners only real options in an attacking sense was Marquinhos, who is a winger and still unproven, Fabio Vieira, who although scored in his only start in the Premier League, is more of a creative option, and Nathan Butler-Oyedeji, who was Arsenal’s only centre-forward option from the bench, and is yet to make a senior appearance.

One of the biggest obstacles to any potential title bid for Arsenal, which has been regularly stated even at times last season, is the depth of the squad. The decision to allow Pierre-Emerick Aubameyang to leave last January and Alexandre Lacazette depart in the summer, while sending Folarin Balogun on loan to Reims, was questioned.

To compete on multiple fronts, or even just for the title, a team needs to have a big squad, shown in recent years by Manchester City and Liverpool’s domination of English football. Arsenal’s squad is nowhere near the level of City’s, so it does remain to be seen how long they can sustain a title bid without reinforcements.

Joao Felix and Mykhailo Mudryk have been touted as options, and some reports have even gone as far as saying Arteta would like to bring in both players in January, but with talk of bidding wars and high loan fees, it might be a bit of a wait before Arsenal can land their targets.

For the time being, however, there is positive news for Arsenal fans, with Emile Smith Rowe in line to return from injury against Oxford in the FA Cup.

Smith Rowe has only made four appearances in the Premier League this season, totaling 48 minutes, with injuries plaguing him during the campaign. Though he may not have been guaranteed as many starts as he managed last season, especially with the form of Gabriel Martinelli this season, there is no doubt he would have been playing a big part in matches.

The Under-17 World Cup winner was without a doubt one of the standout players for his side last season, scoring 10 goals in the league, which among Arsenal’s squad, only Saka (11) could better.From the start of last season up until now, he still ranks as Arsenal’s fourth highest goalscorer in the league, behind Saka (17), Martin Odegaard (14) and Martinelli (13). The majority of those goals came while playing on the left.

With Nketiah the only senior recognised striker available, Smith Rowe’s past scoring habits could suggests Arteta could turn to the England international to provide the goals.

Mikel Arteta has worked wonders with wingers Raheem Sterling and Leroy Sane during his time as assistant manager for City, helping them to become more clinical. Smith Rowe generally operates from the left and likes to cut inside and dribble at defenders, underlined by his 3.8 dribbles per 90 in his limited appearances in the Premier League this season and 1.5 per 90 in 2021/22. With his main No.9 currently out injured, playing Smith Rowe through the middle of the attack, potentially even as a false 9, could be a viable option, with Arteta suggesting in the past that he could be deployed there.

Funnily enough, he came on for 19 minutes against City last season as a centre forward, and though he was unable to get on the scoresheet in his limited game time, it shows that it is most definitely a position in which Arteta feels he could be played in.

What’s also interesting to note with Smith Rowe is the consistency of his shooting abilities. Since the start of last season, of those players to have taken 25+ shots for Arsenal, he ranks highest for shot accuracy (57.1%). This suggests he is a player who one doesn’t shoot often he did avergae 1.9 shots per 90 in the Premier League last season - but also someone who takes their time to take the right shot when it’s on, driving into space before taking on the chance at goal.

Last season he ranked fourth among Arsenal players in the Premier League for touches in the opposition box with 66, but that was across 33 appearances, so averages out to two every appearance. This may go one way in suggesting that he doesn’t hold that presence in the box to be a forward, but in another way it may show how reliant the Gunners were on the likes of Saka in causing problems for opposition defenders and of course how Smith Rowe was expected to take up a different type of role in the team.

It is likely that if Smith Rowe does start on Monday, that he will be deployed on the left with Nketiah up front, but it would be interesting to see in the coming weeks if Arteta would be tempted to use him as a false 9 as an option from the bench or even from the off to give Nketiah a break.

Nevertheless, while rumours continue to circulate around the likes of Felix and Mudryk, for the time being Arsenal fans should be excited by the prospect of one of their brightest talents returning to the team and what he can offer in the second half of the season. 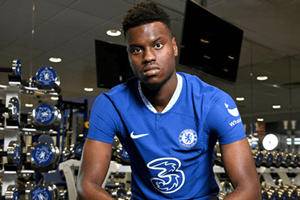 While much of the focus has been on Chelsea's on-again-off-again move for Benfica's Enzo Fernandez, the Blues quietly completed the signing of centre-back Benoit Badiashile on Thursday afternoon. Chelsea were linked with a move for the Frenchman at the turn of the year, but reports of their move for 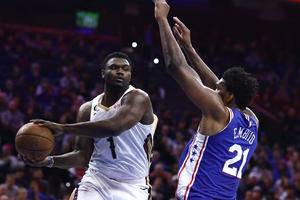 New Orleans Pelicans forward Zion Williamson was in the midst of a standout game Monday before a hamstring injury curtailed his efforts. Now the superstar forward will be sidelined for at least three weeks due to the injury, the team announced after an MRI on Tuesday. Williamson appeared to injure