Will Balogun follow Saliba's path to the Arsenal first team?

Folarin Balogun has been in electric form this season.

After impressing on a loan spell with Middlesbrough last season, Mikel Arteta decided the 21-year-old striker needed more playing time again this season in order to develop his game, moving to French club Reims, before potentially becoming a more regular feature of the Arsenal first team.

Since his summer loan move to France, Balogun has scored 10 league goals, more than any player aged 21 and under in Europe's top five leagues, in his 16 Ligue 1 appearances, starting 13 of those games. This accounts for 47.6% of Reims’ goals in the league this season, the highest contribution of goals scored by a single player for a team in the division so far.

He has been a constant threat for opposition defences, equating 3.1 shots per 90, which is the eighth highest in Ligue 1 of those to have registered at least 1000 minutes of game time, while his 79 touches in the opposition box ranks eighth.

Compared with Arsenal’s current strike force in league duties this season, he has more goals than both Eddie Nketiah and Gabriel Jesus combined (7).

There is no doubt that Balogun is enjoying his football at the minute, but the question is, where does his future lie?

Despite spending slowly going up under the Kroenke’s ownership, compared to their early years, there is still an onus on promoting from within. Of the players to have played in the Premier League this season for Arsenal, five of them came from Hale End, including Ethan Nwaneri, who came on against Brentford at the age of 15 years and 181 days old, the youngest player to make his debut in the Premier League.

Balogun is also a product of Arsenal’s youth system, where he has shone bright over the last few years, including scoring 38 goals in 41 appearances for the U18s and 37 goals in 62 appearances for the U21s. With that in mind, it would suggest there would be a good opportunity that Balogun could eventually make it for Arsenal.

Arteta appears to be a manager who likes to take his time before integrating younger players into his first team squad, as noted with the likes of Gabriel Martinelli, who for a while couldn’t get a start, and William Saliba, who went on a series of loan spells in France became a regular feature for the Gunners. In these two cases alone, it is plain to see that Arteta’s, as well as the players', patience has paid dividends for the club, with both now two of the first names on the teamsheet.

For Balogun however, it is a bit of a conundrum. He is 21 now and has only two years left on his current contract with Arsenal, and he is unlikely to sign a new contract with the club if he isn’t guaranteed the minutes he surely knows he can get elsewhere to develop his career.

What he may also consider, is the two players currently ahead of him in the pecking order. Gabriel Jesus only signed for the club in the summer, while Nketiah signed a new long-term deal in that same summer. Both players are also still young, 25 and 23 respectively, so it’s hard to see a way into the team competing against players who are both similar ages to him, even if he is impressing in Ligue 1.

Places may be even harder to come by if Arsenal are able to secure an attacking player if not in this window, then almost definitely in the summer. Arteta appears to be actively seeking a player who can add options to quite a thin squad in order for his side to compete with Manchester City, and while no deal has been completed for a player as of yet, Mykhailo Mudryk have been heavily linked, with a deal reportedly close according to some outlets.

Should a move go through for an attacking player such as Mudryk, the chances among the first team, especially in the Premier League, become few and far between for Balogun.

A player of his age and quality needs to be playing regular football, and on paper it seems that won’t be found at the Emirates. But, in so many cases already in Arteta’s time as manager, we have seen players who many may have thought would never make it at Arsenal go on to become key assets for the club.

Should this be the case with Balogun also, then the likelihood is that there is a clear pathway for him to make it with the Gunners, especially considering his manager is seemingly full of praise for him, coupled with his popularity among the Arsenal faithful.

It remains to be seen what business will be done in the coming windows, but a lot of it will have a massive bearing no doubt on the very talented and promising Balogun, who has a big decision on his future to make come the summer. 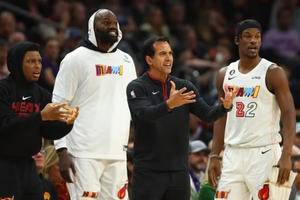 The short-handed Miami Heat became even more depleted in the second quarter of their game Tuesday against the Oklahoma City Thunder, when backup center Dewayne Dedmon was ejected. The Heat had only nine players available for the game and Dedmon was one of eight they used in the first half. He enter

Silva worth his weight in gold as Fulham continue to shine

Fulham vs Chelsea has been a one-sided rivalry in recent times. The Blues are unbeaten in 21 meetings with the Cottagers, last losing back in 2006. But when the west London sides meet in the Premier League on Thursday, Fulham will begin the game higher up the table than their more illustrious oppone 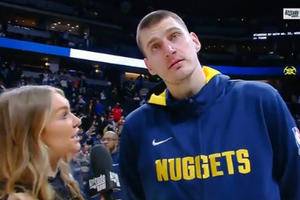 The Denver Nuggets have been rolling as of late, winning 12 of their last 15 games heading into Monday night’s showdown against the Los Angeles Lakers and they came out victorious in this game as well, beating the Lakers 122-109 to improve to 122-109. Currently sitting at the top of the Western Con