One of the more-intriguing NBA Draft decisions to watch for this offseason has been that of Arkansas Basketball forward Jaylin Williams, a player whose draft stock has only continued to rise since conference play began this past season.

As you likely know by now however, the star Arkansas forward would announce on Saturday afternoon that Williams would remain in the 2022 NBA Draft, ending his collegiate career.

A player who was expected to be a key piece for a Razorbacks team that will likely be one of the SEC’s best in 2022-23, how might Arkansas replace Williams next season?

How will Arkansas Basketball replace Jaylin Williams in 2022-23? When answering that question, one thing in particular that will very-hard to replace is Williams’ on-court defensive impact, as he was one of the conferences top defensive players at 6-foot-10. In fact, one could argue that replacing a player that had the same amount of impact that Williams had on the Razorbacks success in near impossible, but doing it will likely be key to Arkansas’ overall success in 2022-23.

To do this, the Razorbacks have made some impactful additions through the transfer portal this offseason, each of which could play a role in replacing that defensive production, along with his 10.9 PPG and 9.8 RPG. Here is a look at those names, along with what each did a year ago.

A transfer from Missouri, Brazile might be the favorite to replace Williams in the Razorbacks starting lineup. The 6-foot-9 forward is coming off an impressive freshman season with the Tigers in which he started in 23-of-25 games at Missouri, averaging 6.6 PPG and 5.1 RPG.

Graham is a more-experienced option than Brazile having transferred from Arizona State where he started in 43-of-78 games the past three seasons with the Sun Devils. Graham is coming off a career-year in which he averaged 9.9 PPG and 4.6 RPG to earn Second Team All-Pac-12 honors.

Mitchell comes to Arkansas after starting in 50-of-56 games across the last two seasons at Rhode Island. One of the top shot blockers in the A-10 having averaged 2.4 BPG a year ago, Mitchell is also coming off a career-year in which he averaged 10.7 PPG and 5.6 RPG.

The final name to watch for to replace Williams is Mitchell who also comes from Rhode Island. Mitchell is also a shot-blocking threat having averaged 1.4 BPG last season while starting in 27-of-31 games, averaging 9.9 PPG offensively with 7.3 RPG. 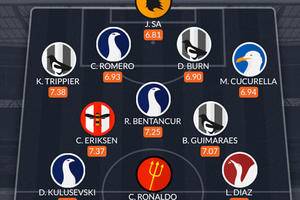