The Brooklyn Nets have been working to find Kevin Durant a new home in the NBA. However, the team hasn't found any success in this, with KD looking stuck with the organization, even after revealing he's not happy with the direction they're going in at this moment.

Many believed this situation would have been solved when the Boston Celtics were mentioned among the candidates to land KD this offseason. They have good players and draft picks to unlock negotiations with the Brooklynites. However, things haven't changed, and Durant keeps waiting for a resolution.

Perhaps the Nets were too bold at the beginning of negotiations, as they asked for too much from the Celtics for an injury-prone Durant. According to Adam Himmelsbach of The Boston Globe, the Nets asked for Jayson Tatum and Jaylen Brown in a potential trade for KD, which was off limits for the C's.

A league source said there has not been any real traction on a deal that would send Kevin Durant from the Nets to the Celtics. It’s no surprise that the sides have had some discussions, of course.

Boston has been considered a potential landing spot in large part because the Celtics are better positioned than most to offer an enticing package. But there are limits.

According to the source, Brooklyn initially tried to pry both Jayson Tatum and Jaylen Brown from Boston. That proposal went nowhere, of course. The source confirmed recent reports that Brooklyn later shifted its focus to a deal centered on Brown, Marcus Smart, and a massive haul of future first-round draft picks. But the Celtics were not interested.

It's already huge for the Celtics to ship Jaylen Brown somewhere else, imagine if they actually parted ways with Brown and Tatum. Many people have suggested a trade centered around one of them, but not with the two included. Celtics fans would never forget that. Still, Brad Stevens is too smart to know that landing KD in exchange for those players would have been bad.

It seems like we're still in the same place we were before free agency started. Durant wants a change of air, but not every team in the league is willing to pay what the Nets are asking for their superstar. 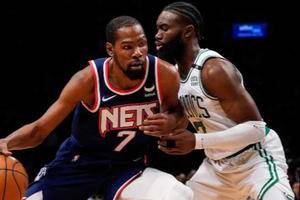 Who is Amadou Onana? The towering Belgian to shore up Everton's midfield

When Lille allowed Boubakary Soumare to leave for Leicester last summer, some may have been feared at how his sale would impact the team. Worst was the departure of Christophe Galtier, but even so; Soumare started 21 times in their title winning campaign. Yet Lille needn't have worried too much, wit