The NBA has announced a one-year suspension and $10 million fine for Phoenix Suns/Mercury owner Robert Sarver.

Back in November 2021, sources close to ESPN brought up allegations of racism and sexist behavior from the Phoenix Suns and Phoenix Mercury team owner Robert Sarver.

Apparently, these allegations began surfacing back in 2016 after a game between the Suns and Golden State Warriors, but this wasn’t when Sarver began his racist and misogynist behavior.

It took interviewing over 300 people and 800,000-plus documents to obtain this disturbing information, which included over 70 current and former Suns employees. There had been reports of this behavior dating all the way back to 2004. Sarver has been the team owner for 18 years, so there was a lot of information to gather during this investigation, which brings us to where we are today.

Robert Sarver suspended from Suns for one year, fined

Honestly, it’s unbelievable that the NBA discovered this information and decided that a one-year, $10 million fine was a justifiable punishment. Especially, when you travel back to April 2014 when former Los Angeles Clippers owner Donald Sterling was banned from the NBA for life on top of a $2.5 million fine for making patterned racist comments as well.

One positive though, the $10 million fine will go to organizations that are focused on addressing racial and gender-based issues in and outside of the workplace.

Along with Sarver’s suspension/fine, he is barred from any contact with the organizations. No attending meetings, practices, or anything of that nature.

In addition to that, the league took a more sensitive approach and is attempting to get Sarver help. He is also ordered to complete a training program with points of emphasis on respect and appropriate behavior in the workplace. As for the $10 million fine, that’s the maximum the NBA can fine him thanks to the NBA Constitution & By-Laws.

Equally important, the issue here isn’t just racist comments. This is also about making sexist comments about female players. Personally, I’m surprised with all of the evidence received, Sarver isn’t banned for life from all NBA/WNBA activities. Whether you read the full 43-page report or not, this punishment is a slap on the wrist at most, and quite the sympathetic approach.

According to ESPN’s Adrian Wojnarowski, Sarver doesn’t agree with his suspension.

“Accepting the consequences of the NBA’s decision” on Tuesday “For the Suns and Mercury organizations, that begins with me. While I disagree with some of the particulars of the NBA’s report, I would like to apologize for my words and actions that offended our employees. I take full responsibility for what I have done. I am sorry for causing this pain, and these errors in judgment are not consistent with my personal philosophy or my values.”

Having another team owner displaying such disgusting behavior and getting away with it for so long isn’t how the league wants to be portrayed to the fans or players. It shows there remains a tremendous amount of room for improvement in the league and society. 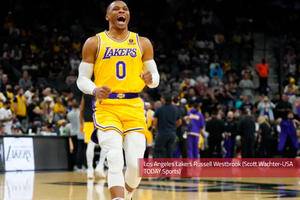