When the Boston Celtics ruled out Malcolm Brogdon for Friday’s game against the Denver Nuggets due to right hamstring tightness, it wasn’t seen as a serious injury that would cause the veteran point guard to miss a lot of time.

And Celtics interim head coach Joe Mazzulla confirmed that sentiment prior to taking on the Nuggets.

“Just day-to-day. Just playing it by how he goes each day,” Mazzulla told reporters, per Bobby Manning of CLNS Media. “He seems to be comfortable with his rehab and he’ll be back sooner rather than later.”

That’s certainly good news for the Celtics and Brogdon, who has a history of injuries that has limited his playing time throughout his career.

While the Celtics have the talent to overcome an injury to Brogdon, the seventh-year pro has made an immediate impact as a bench catalyst in his first season with the franchise. Brogdon is averaging 13.7 points, 3.8 rebounds and 3.5 assists on the season.

Even though Mazzulla gave a very optimistic update on Brogdon, his health still bears monitoring as a hamstring injury is one that could linger or easily be aggravated. It’s unclear if Brogdon will be available to play Saturday when the Celtics travel to Detroit to take on the Pistons in the second game of a back-to-back for Boston.

With Brogdon out against the Nuggets, it could open up an opportunity for Payton Pritchard. The third-year guard has rarely played this season, registering seven DNP-coach’s decisions through the first 11 games. 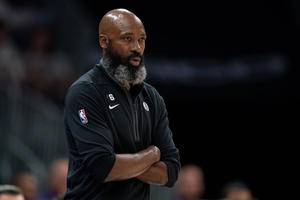 The Brooklyn Nets officially named Jacque Vaughn as head coach on Wednesday. Sources tell ESPN that Vaughn’s deal is through the 23-24 season. Vaughn’s promotion came as a surprise to many inside the league guys who believed reports that the franchise planned to hire suspended Boston Celtics coach I

What next for Zaha as Crystal Palace contract expiration looms?

It was a long time coming, but Crystal Palace finally picked up their first away win of the Premier League season on Sunday. Those Palace fans who made the trip to the London Stadium will no doubt argue it was worth the wait. Michael Olise’s deflected strike deep into second-half stoppage time earn